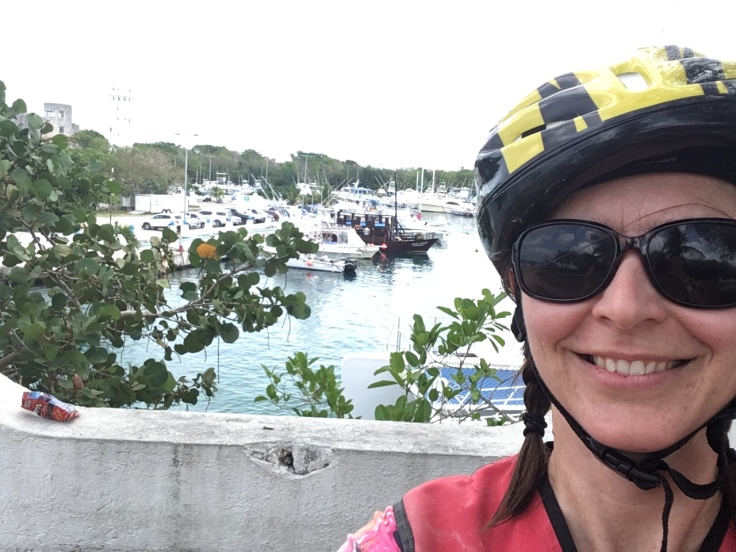 As I was writing our family Christmas letter this year, I remembered back to the cruise we went on in May. We have been married for 15 years, and celebrated a little early because the cruises were cheaper then than our anniversary in the mid summer.

We ate so much food. I bought a journal in Belize to write detailed descriptions of the food to help me remember its beauty and bounty. My favorite thing was having waffles with blueberry compote and Nutella for breakfast the few days after I discovered this option. Every time we stopped at a port, we went on an excursion, and on our last excursion we decided to try those motorized bikes—it seemed like a good idea after all of that Nutella for breakfast.

I like biking a lot, and though I lack skill, I make up for that in enthusiasm.  We got off of our cruise ship, took our Mexican taxi van, and stood in a group with the others who had signed up for the bike ride as well while we had a safety briefing.  Our guide showed us how to use the bikes, and then said we could try a little loop before getting on the road. I volunteered to go first because I was so excited. I had never tried a bike which had motors inside of the bars to help me along before.

I confidently jumped on, and pedaled straight toward the orange cone we were supposed to ride around. Since it was my first try, and since I was so enthusiastic, I took the turn a little too quickly, and gracefully slid my bike out from under me, landing flat on my face and scratching my knee.  It was a great learning experience.  For the whole rest of the bike ride I used the proper amount of caution, and no one else in my group fell off of their bikes.

It just went to prove that wise old adage that if you can’t serve as a good example, you’ll just have to be a terrible warning.